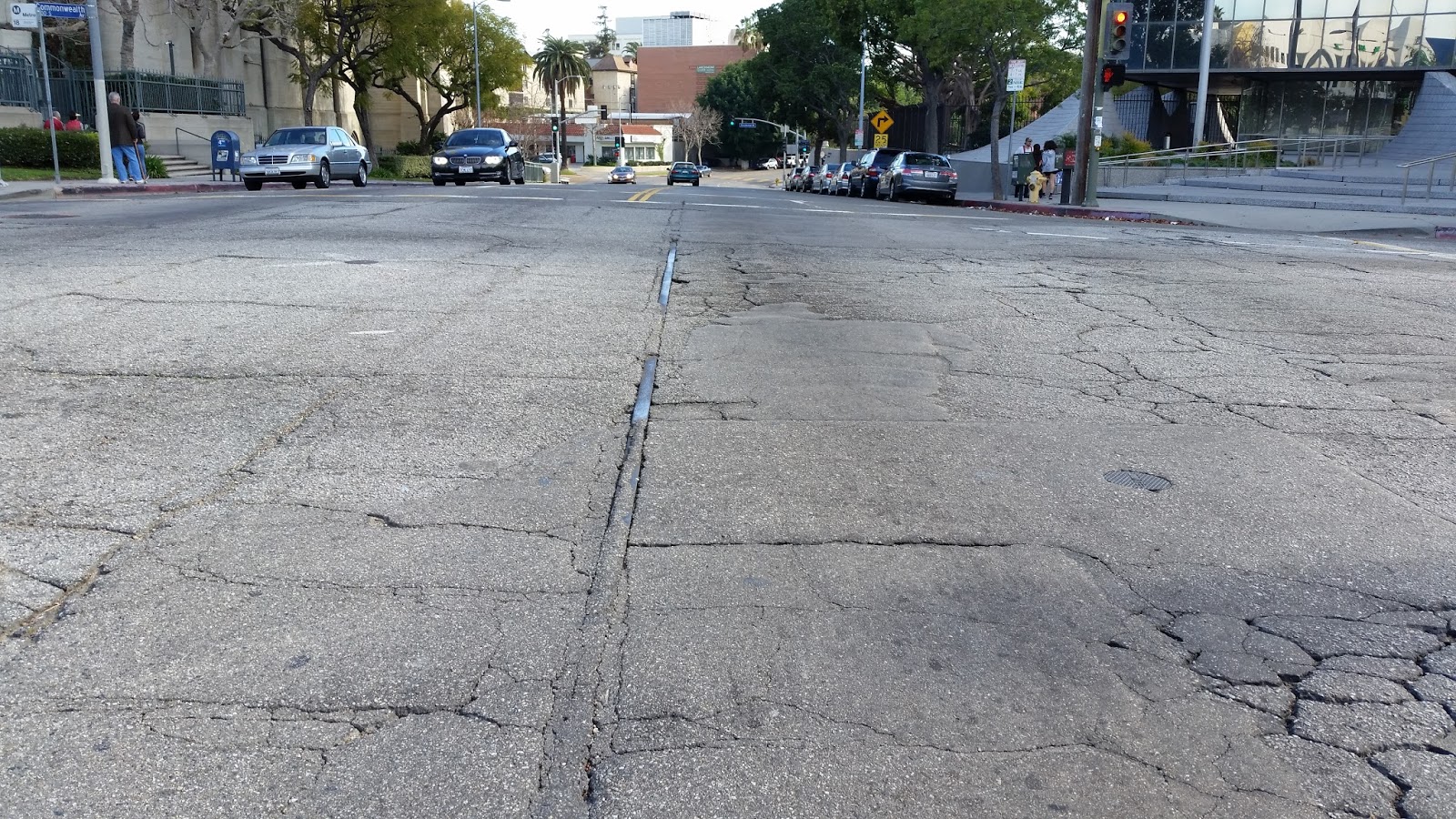 An intersection at 6th Street and Commonwealth.

Arrive at the intersection of 6th and Commonwealth, and you'll notice a line drawn in the poorly maintained roads.  Beneath the layers of asphalt, vestiges of what was formerly the world's most elaborate streetcar system have slowly started to fight their way to the surface.

Having lived in Houston, and now living in Los Angeles, it isn't too hard to see how the pair are two sides of the same coin, or perhaps just two data points along the same narrative.  More bluntly, Los Angeles fifty years ago is what Houston is today.  Los Angeles existed before the advent of the automobile, and faced an awkward transition into the age of the automobile, something for which it continues to pay dearly.  It is now entering that junction in its development where it can follow the status quo, or accept the investments that would be required to serve a generation whose lives don't revolve around the car.  Houston has only really existed in its current scale with the automobile, and really won't exist in any other form for the foreseeable future.

Given the setup of Los Angeles is not dissimilar from Paris, a comprehensive rail system (or something of the sort if you are of the opinion that rail is too expensive) would function relatively well. The interesting reality is that the city is using preexisting right of ways from the historic Pacific Electric cars to build the new light rail, and is doing so faster than anywhere else in the country. Thus, it sounds like within the next decade or two (eek), this type of system might come back to place.

It's not the most beautiful city in the world.  In fact, those individuals stepping off the plane from Asia into this gateway city may think they've gone back in time.  Too much stucco and too little street cleaning, streets that are too wide and give deference to cars rather than bicyclists and pedestrians.  You can tell that the concepts are new to a lot of Angelenos, in the way that they honk at pedestrians who have the right of way, or don't know to watch out for bicyclists before taking a turn or opening the car door. Still, sufficient historic buildings and a gridded layout exist to serve as the backbone for an incredible future, especially in what is actually the densest metropolitan region in the country.  It seems the proper steps are already being taken.  But is it really impossible for privately owned rail to succeed in the US?

The weather is about perfect 300 days of the year, so it isn't hard to envision a much different future for the basin, and perhaps one that can take a cue from the past.  I'm pretty optimistic.