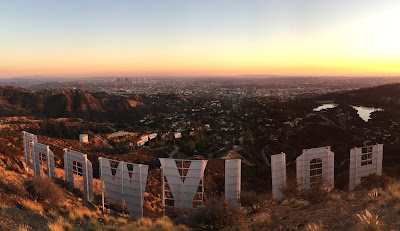 Los Angeles. The City of Angels. The city where dreams are made, and where they’re broken that will chew you up and spit you out like the next fad diet. The city of gangs and sprawl and Rodney King, a melting pot and a patchwork quilt. The most racially integrated large city in the United States. A relatively young American city that smells like the ocean and urine and mountains and smog and bulgogi and pupusas and Spider Man will help you to some Mary Jane. A city of Beverly Hills and Skid Row. A city that is Googie-fantastic and noir and booming and just friendly enough for you to get comfortable. A city that drilled for oil and found movie reels. Where lalaland always be reel. A city where the first question on Saturday morning is “surf or ski or work on a movie?” A city where “old town” means “looks like New England.” A city where anything goes, except during rush hour on the 10, but that’s changing because it’s building rail faster than any other American city because rail is hip again. A city that knows how to party like it’s 1984 in 2024. A city of trends that’s still too cool to care. A city where sometimes you’re better off if you speak Korean or Spanish than if you speak English. A city with all the culinary trappings of New York but we rock up in sand-covered flip-flops because bourgeois intellectualism is like totally banal man. A city where the streets aren't paved with gold, but the crosswalks are painted with rainbows. A city where who the fuck cares because the sun is shining and there’s wind in your hair. It’s Little Tokyo and Koreatown and Little Osaka and Beverly Hills and Little Thai Town and Historic Filipinotown and Chinatown and Little El Salvador and Compton and Watts and cakes melting in the rain that so rarely comes. A city of East and West. A city that gives new meaning to blight and flight and light and might. A city that will inspire you enough to write naïve and possibly oblivious paeans to all of nothing.